Wheat is considered the second most consumed grain in the entire world, so it is not a leap to say that it ranks as one of the most traded as well. From the time of the ancient civilizations like the Egyptians all the way to present day, wheat has been gracing the tables of homes and restaurants worldwide.

There are certainly valid reasons for why wheat is such a popular grain, like its shelf-life. It can remain fresh for a long period of time while still maintaining its nutritional value. It is also easily grown in a multitude of climates.

Wheat, or grains trading, if you are in the industry, is one of the oldest commodities to be speculated. Back in 1877, wheat futures began to be traded along with oats and corn. 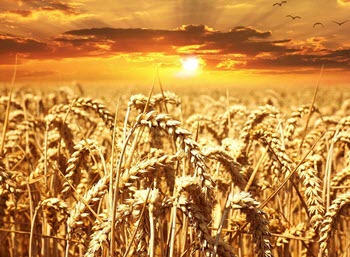 These big three were the original commodities upon which contracts were placed shortly after the Chicago Board of Trade opened. It was not until 1921, that the actual CBOT started trading wheat.

The initial trade volume of the grain was around 2.5 million which pales in comparison to the current day amount of more than 30 million futures contracts traded yearly. Obviously, the demand has increased with no sign of it changing.

Because wheat is a major food source and not a grain prone to use in other products such alternative fuel sources, it has the characteristics of a more stable commodity. There is one obvious reason above all that the grains trade is so popular and speculation is so prevalent, wheat is a staple food and makes up about ten percent of the entire world production.

In several emerging markets, like some of the underdeveloped countries, there is a population boom which tends to increased wheat consumption. Also, with increasing populations usually comes an increase in meat consumption for those countries. Wheat, being an important livestock food source, will continue to be consumed at greater quantities in these countries as well.

For investors, wheat trading can be an excellent way to hedge your portfolio against inflation and diversify. If the US Dollar is weak, like the current policy makers have made it, wheat prices tend to stay higher for exports.

Corn subsidies tend to drive the price of wheat higher, causing less supply of wheat than corn. Should these subsidies end, being a political hot potato, the production of wheat may increase driving the price down.

Geopolitical issues worldwide tend to affect the price of wheat. Because of the changes in government leaders, policies and tax structures, there tends to be a change from time to time in incentives and subsidies. Wheat growers and exporters can be rewarded or punished driving the price up or down.

There are a multitude of avenues to trade wheat starting with online trading sites and ending with traditional brokerage houses. It really is up to you and your level of comfort and experience as to which avenue to choose.

You should know your market and start paying attention to the agricultural news surrounding wheat production. You should know that the wheat market does not respond to geopolitical news and world events like the stock market does.

Also, it would be best to get in touch with a professional that can guide you under their expertise. This will give you the best advantage in wheat commodities trading and a bright future with your investments.