The traditional way of investing in silver has been to actually own and keep physical silver, often in the form of coins, rounds or bars. 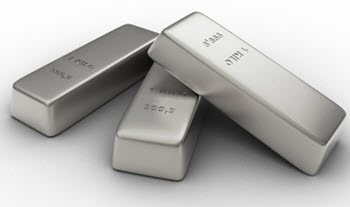 Silver coins are legal tender in the country of issue. Examples of well-known silver coins commonly purchased as an investment are the one ounce Canadian Silver Maple Leaf (99.99% silver) and one ounce the American Silver Eagle (99.93% silver).

Sterling silver coins with a 92.5% silver content were minted until 1919 in the United Kingdom. They were crowns, half-crowns, florins, shillings, sixpences and threepences.

Silver rounds looks like coins, but are not legal tender (unless silver in itself is legal tender in that jurisdiction) and are not minted by governmental currency mints.

Among silver investors, .999 fine silver rounds are a popular choice. There are a lot of different vendors to chose among if you want to buy silver rounds containing 1 troy ounce of silver.

Since silver rounds aren’t created by official government mints, it becomes especially important to do your own research before buying and stick to reputable vendors.

Bullion silver bars are flat and rectangular, a shape chosen for its efficiency when it comes to storing and transporting the silver. In some countries – such as Switzerland and Liechtenstein – major banks will buy and sell bullion silver bars over the counter, and also offer allocated (non-fungible) storage.