The Chicago Mercantile Exchange (CME) is a financial and commodity derivative exchange based in Chicago, USA. CME has the largest options and futures contracts open interest (number of contracts outstanding) of any futures exchange in the world.

In colloquial speech, CME is often referred to as the Chicago Merc or just the Merc. When it was founded back in 1898, its name was The Chicago Butter and Egg Board.

Examples of financial instruments traded on the CME are instruments based on commodities, equities, interest rates or currencies. Alternative investments, such as weather derivatives and real estate derivatives are also available on this exchange.

The parent company of CME is the CME Group Inc, which also owns the Chicago Board of Trade (CBOT), the New York Mercantile Exchange (NYMEX) and the Commodity Exchange (COMEX).

At the time of writing, approximately 10 percent of the total volume of trade at CME takes place in the traditional trading pit instead of electronically. The trading pit with open outcry is open during regular trading hours (RTH).

When CME Globex was launched in 1992, it was the first global electronic trading platform for futures contracts. Originally, it utilized Reuter’s technology and network, but in 1998 it switched over to a modified version of the NSC trading system developed by the Paris Bourse for MATIF (now Euronext). 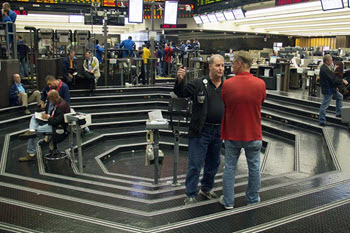 True to their origins as a butter and egg exchange, CME still lists a lot of agricultural commodity contracts. Of course, the agricultural underlyings have changed over the years. Today, you can find commodity contracts for Non-fat Dry Milk, Deliverable Non-fat Dry Milk, International Skimmed Milk Powder (ISM) and Dry Whey here – just to mention a few. More traditional offerings such as Live Cattle, Feeder Cattle, Lean Hogs and Frozen Pork Bellies are also available at the CME, together with Butter, Cash-Settled Butter, and Class III and IV Milk. Other examples of available underlyings at the CME are Hardwood Pulp, Softwood Pulp and random Lenght Lumber.

CME was the driving force behind the creation of the CME SPAN, a software currently used as the official performance bond (margin) mechanism for approximately 50 exchanges, clearing organizations, service bureaus and regulatory agencies world wide.