Palladium as an investment

Investing in palladium is much less common than investing in gold and silver. Each year, nearly 45% of the mined palladium comes from Russian mines owned by the Norilsk Nickel company, while roughly 40% comes from South African mines, making the palladium price susceptible to Russian and South African issues. The remaining palladium is largely derived from mines in the USA and Canada.

The Russian government controls a stockpile of palladium left from the Soviet Era. In the past, part of this stockpile has been sold off in large quantities, prompting in drop in global palladium prices. The current size of the Russian palladium stockpile is a state secrete.

On the spot market, palladium is traded with the code XPD. When trades are settled in USD, the code is XPDUSD.

Major users of palladium is the auto-mobile industry, the electronics industry and the jewellery industry. The alloy marketed by jewellers as white gold consists of gold + at least one white metal, and that white metal is usually nickel, manganese, silver or palladium.

In 2016, CPM Group reported that automotive use of palladium was increasing, partly due to a shift from platinum towards palladium. Growing Chinese car sales was also cited as a contributing factor to increased palladium demands.

Platinum is used to reduce emissions in diesel-powered engines, while palladium is used for the same purpose in gasoline-powered engines. Because of this, an increase in gasoline-powered auto sales will translate into increased demand for palladium. Consumer demands shifting from small-sized cars to larger vehicles can also have an impact, since more palladium is required when the engine is larger. 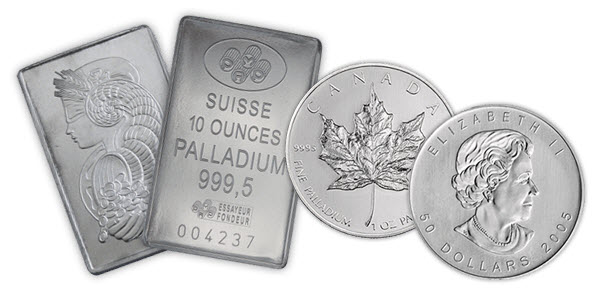 Palladium coins are much rarer than gold and silver coins, and the liquidity of the market is also poorer with larger spreads. The very first palladium coins in the world were produced as recently as 1966, when Sierra Leone issued their palladium coins. The following year, Tonga followed in suit with the Tonga Palladium Hau. The USSR (Soviet Union) minted the largest number of palladium coins.

Other examples of countries that have minted palladium coins are Canada, China, France, Portugal, Slovakia, Palau and Australia. Several of these countries have only created special edition commemorative palladium coins in small batches.

Another example of Canadian palladium coins are the Big & Little Bear Constellations. Four versions were created, one for each season. 297 spring coins were minted, 296 summer coins, 296 fall coins and 293 winter coins.

In 2010, the United States Mint was authorized to produce and distribute a one-troy-ounce palladium coin, but at the time of writing, no such coin has been created yet. The planned coin would carry a 25 USD face value.

Palladium rounds look like coins but are not minted by a government as legal tender. The palladium content can vary.

Palladium ingots used for trade at exchanges such as the London Platinum and Palladium Exchange must be assayed, marked, stored and transported in accordance with the rules of the exchange.

Instead of exposing yourself directly to the price of palladium, you can invest in palladium producing companies. Here are a few examples of exchange-traded palladium companies:

Public companies have their shares listed on an exchange, which typically translates into higher liquidity, smaller spreads and a stricter set of rules than for companies that are only traded over-the-counter.

Just as for most other precious metals, many palladium trades are speculative and carried out by participants that have no wish to make or take delivery of any physical palladium. A majority of all palladium trades at the LLPM are cash-settled or cancelled in advance.

The bid price is the price at which LPPM members guarantee that they will buy (good delivery) palladium. The LPPM bid price functions as a benchmark for global palladium prices.

The LPPM Members are palladium/platinum producers, refiners, fabricators, manufacturers, distributors and large international banks. An member can be either a full member of an associate member. At the time of writing, the LLPM has 16 full members, of which ten are also market making members.