From the time of the Mayans, more than 5,000 years ago, cocoa has been a food used ritually, nutritionally and recreationally. It is called the “food of the gods” for a reason. The Greeks referred to it in this fashion and the plant has lived up to its name.

The cacao plant, which produces the seeds that are dried and fermented to be made into a variety of foods, is primarily used in making chocolate. Worldwide, chocolate is consumed and enjoyed in great quantities, with the rate of consumption not likely to change.

The Theobroma Cacao plant grows in the tropical regions of the world, providing it has humidity, consistent rainfall and a good soil drainage system within which to thrive. The main ways that cocoa is used is cocoa liquor for confectionery foods, cocoa butter for chocolate and cosmetics, cocoa powder for desserts and drinks and cocoa husks for a multitude of various uses like animal feed. 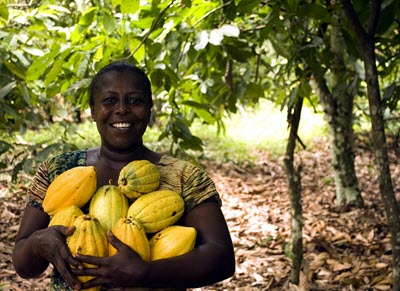 The largest producers of cocoa are several places on the Ivory Coast of Africa, Indonesia and a few countries in South America. It is no surprise that the largest importers of the bean are North America and Europe.

The Spaniards in the fifteenth century began to be interested in the cocoa trade, spreading its popularity throughout the region for the next few centuries. This led to worldwide awareness and eventual consumption of the bean and its benefits.

At the present, four and a half million tons of cocoa are consumed yearly, leading to its impact and importance in the world markets. Cocoa is traded on the two exchanges New York Mercantile Exchange and the Intercontinental Exchange. New York’s prices are based on South-Asian markets and ICE prices are based on Africa.

The reasons that most investors look into adding cocoa to their portfolios is for diversification and the growing demand. It is unlikely that the demand will decrease, given the bean’s popularity throughout history.

If you are interested in trading in cocoa, it would be best to learn as much as possible about the volatility of the market and the history of its ups and downs. Because quite a bit of the trade depends on the labor markets, it would be wise for any potential investor to learn about the inevitable change for the betterment of the harvesters.

Abolishment of child and slave labor is at the heart of this change, which has been a long time coming. But with any change, comes growing pains. It is always best to understand the agricultural aspects of the growing cycle and to also stay abreast of all the geopolitical news and events.

Finding a good source of advice on trading and even a group of investors to become a part of may safeguard your future in cocoa trading. You may feel comfortable trading with sites online or feel that you need a little more hand holding with a brokerage house. With either avenue, cocoa commodities can bring sweet rewards if carefully traded.